Eugen Krieger worked in Art Blue´s lab as a student from January 1, 2016 to June 30, 2016. His education in new media was co-financed by the EQJ program of the European Union. Before this Eugen was a Counterstrike Professional and team leader there. His career ended as the new version Counterstrike Global Offensive (CS:GO) was released. Heading to an age of 25 years he had to rethink about his future. Reaction time and speed to interact to be a winner in this type of games came for him to a natural end. The average age for a Counterstrike Professional is fairly under 20 and the leading teams are from Korea. Art Blue wrote in rezmagazine, January 2016 about the future of gaming Parallel Lives: Final Blue – Tears of Rain.

Eugen Krieger brings in his contribution he named SOLARIS for a reason the SURREAL TOWERS to life. A part of his dream to get reborn in media – like SOLARIS was remade in 2002 featuring George Clooney. Eugen made the machinima in August 2016 in opensim – Metropolis grid. After being a succesful gamer in the past his dream is now to enter the media markets and become a media professional. The Surreal towers have been made by Uan Ceriaptrix (Brasil), Ink and Stem van Helsinki (Netherlands), Trillium Tansee (USA), Gem Preiz (France), Moewe Winkler (Germany) and have been sent in as contributions for the IMMERSIVIA section of the Santorini Biennale 2016. The making of the Surreal Towers have been supported with a sim core grant by Linden Endowments for the Arts. 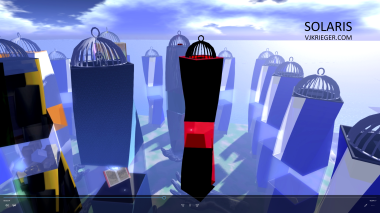 About Eugen Krieger: The making of …

His machinima´s roots are in gameing: fast moves of the camera and hard cuts bring the feeling of a live performance back to the screen. You see it in one of his first machinima Eugen made as VJ Krieger for Venus Adored performance “GOLD”. VJ stands for Video Jockey. The Life Performers Meeting in Rome has become the leading event for this kind of intermedia events and shows in clubs.

Eugen, born in Russia, has opened a second layer: the art of showing slow moves – as a contradiction to gaming. This is best to be seen in his machinima Good Bye Shining Blackstar, where he sets the great Sergej Eisenstein back in place in a new time: the time of user created reality.

This is a text widget. The Text Widget allows you to add text or HTML to your sidebar. You can use a text widget to display text, links, images, HTML, or a combination of these. Edit them in the Widget section of the Customizer.
%d bloggers like this: